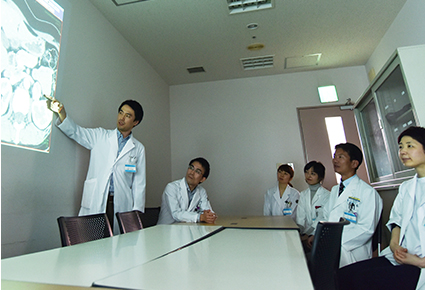 We mainly diagnose and treat patients with diabetes, endocrine disease and dyslipidemia.

More than 600 diabetes patients visit the department regularly. Increases in the numbers of cases of insulin treatment (about 250) and cases with various complications can be raised as recent trends. The number of patients hospitalized annually for diabetes is about 130 people, but the proportion hospitalized for the purpose of treatment of diabetic complications or concomitant disorders has grown higher than those for so-called educational hospitalization. Recently, we have introduced continuous glucose monitoring (CGM) and sonsor augumented insulin pump (SAP) to for better treatment methods for diabetes patients.

The office of the Hiroshima Healthy Diabetes Friendly Society, the local branch of the Japan Diabetes Society, is located in the department, and is making efforts towards the enlightenment and education of diabetes patients through lecture meetings held 6 times a year and walk rallies.

Among patients with endocrine disease, there are many with thyroid disease, Basedow's disease in particular, and we conduct radioiodine therapy in indicated cases. In addition, the number of patients being referred to us with diseases such as pituitary gland, adrenal or parathyroid disease, etc., is also increasing and we are putting a lot of effort into detailed testing and the determination of optimum treatment methods. 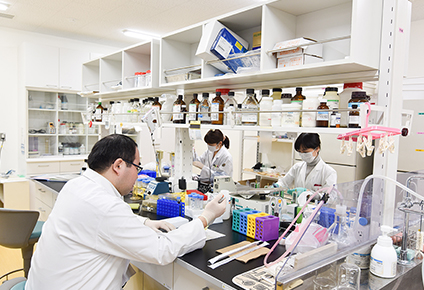 Since 1970, we have been conducting an epidemiological study titled “the Hawaii-Los Angeles-Hiroshima study,” which involves two populations of Japanese people without any differences in genetic predisposition but who live under different environmental factors: the group of Japanese-Americans having acquired an American lifestyle and the group of native Japanese living in Hiroshima following the Japanese lifestyle. By comparing the medical survey data between these two groups, we previously reported the influence of lifestyle westernization on the features of illness among Japanese people.

Our research for adrenal tumor is to elucidate etiology and pathology of primary aldosteronism and Cushing syndrome by clarifying mechanisms of aldosterone and cortisol production. Furthermore, we are trying to innovate new drugs that can regulate the production of adrenal hormones and feedback them to clinical cases.

We investigate a developmental mechanism of brown adipocytes using in virtro and iv vivo models. Clinically, we study the metabolic function of human brown adipose tissues especially in pheochromocytoma or hyperthyroidism patients. We are planning to apply brown adipocytes for the treatment of metabolic diseases such as obesity and diabetes.

We investigate the role of gut environment, especially gut microbiota in the pathogenesis of metabolic syndrome (MetS) by using in vivo models. Furthermore, we also examine the relationship of human gut microbiota with food habit and metabolic parameters in cooperation with the epidemiological study. We are planning to apply the resulting knowledge for gut microbiota-targeted therapy of MetS.