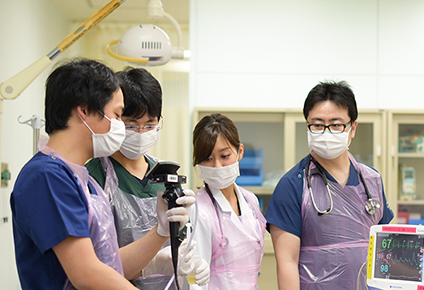 For an accurate diagnosis and understanding the pathogenesis of a disease, we conduct bronchoscopy and pulmonary function tests including spirograph, FeNO, airway resistance measurement. We work closely with other departments such as the department of respiratory surgery, collagen disease, radiology, radiation therapy, pathology and so on to provide the best medical care to our patients.

We have demonstrated that PAI-1, an inhibitor of fibrinolytic system, is involved in the pathogenesis of various respiratory diseases such as interstitial pneumonia, bronchial asthma and lung cancer, and can be the promising therapeutic target.

We have established the measurement assay of KL-6, the world's first serum biomarker for interstitial pneumonia, and have conducted extensive research from its molecular basis to clinical practice.

We are actively participating in group research conducted by Ministry of Health, Labor and Welfare. We have also conducted various clinical studies of obstructive pulmonary diseases and diffuse lung diseases using airway resistance tests and induced sputum tests, and we also have been conducting longitudinal cohort study of COPD.

For more than half a century, we have continued longitudinal cohort study for former workers of Ohkuno-jima poison gas factory and have presented numerous reports.